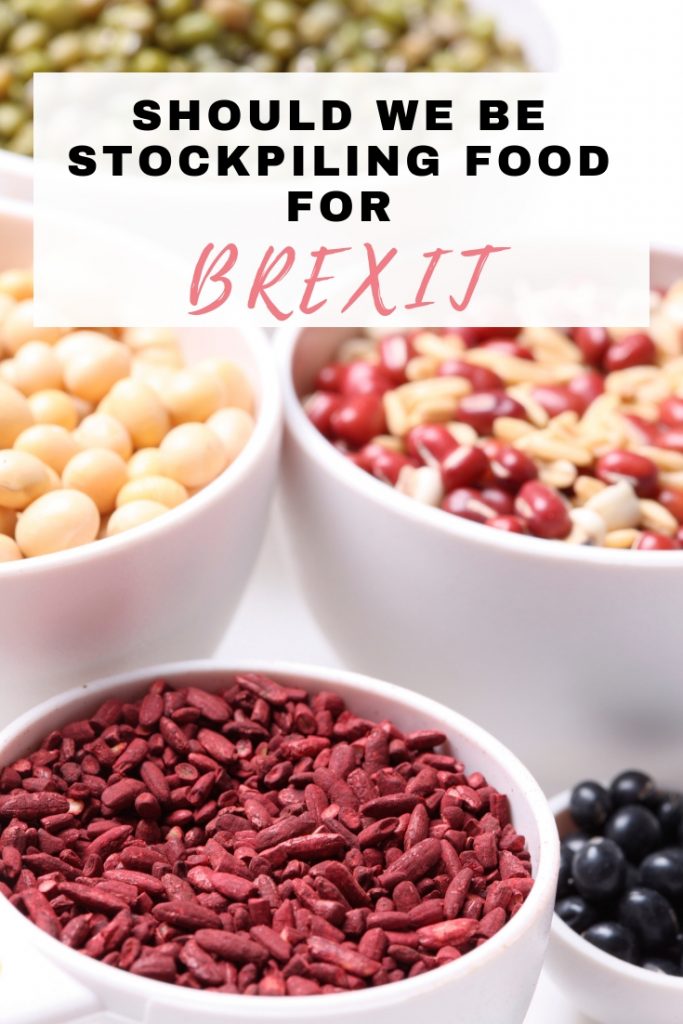 What could happen after Brexit?

There is no way to know for certain what will happen after Brexit. However it is believed that a no deal Brexit (where the UK would leave the EU without any agreements in place) could impact our day to day lives in the following ways (source)

How likely is all of this going to be?

There is no doubting that Brexit is going to impact us. In fact, blogger Laura from Savings 4 Savvy Mums has already noticed a massive increase in food prices: ‘I am [going to stockpile food] just because I can already see food prices going up. We shop in Aldi and for a family of 4 we now pay almost 20% more than we did before the vote. I think this is only going to get worse before it gets better.'

UK supermarkets work on a ‘just in time' basis, which means that stock is delivered daily and not stored in warehouses. Think about when heavy snow hits the UK and shops empty in a short space of time. It is feared that the same could happen after Brexit.

The thing is, we don't know how this will all work out. We can speculate and experts have their theories, but we don't know.

There are many reasons you might consider stockpiling for Brexit.

It is often made light of because of people worrying they won't have their favourite jam or coffee.

Stockpiling food isn't just about being worried that the supermarkets will be empty. It is also about avoiding the price hikes after Brexit. As we've seen for Laura and her family of 4, they are paying 20% more for food now and that is likely to go up before it comes down again.

If you are worried about the cost of food after Brexit and you have a bit of extra money right now then you might want to consider building a stockpile.

People clearing the shelves WILL be panic buying and creating empty shelves.

However no one I have spoken to or read about is going this sort of stockpiling.

The people who are stockpiling food for Brexit are putting aside their favourite non-perishable items just in case, or throwing a few extra bits into their weekly shop.

I asked some financial bloggers is they are going to be stockpiling food for Brexit, and received a varied response.

Charlotte from LottyEarns isn't stockpiling, saying: I am not. I have thought about it for a while and I don't think you should overspend now, potentially hurting your budget if you are panicking there won't be food. There will be food. If you're concern is more that there are certain things you like to eat and don't want to risk paying more (red wine/olive oil etc), then I don't think there is any harm buying a few more bottles than you usually would. There's no need to go out buying 50 tins of beans.

Joseph from Thrifty Chap says: When Harrogate had the Tour De France a few years back when I lived there, the supermarkets were ransacked. I've got a photo on my twitter of a completely empty bread aisle. Absolutely bonkers. Since then we've always had stuff in, even though we've moved. Tins are usually purchased on offer and we even have bottle water in the back of the cupboard as United utilities had water issues a couple of years ago. So maybe a few extra tins and essentials in ahead of Brexit Day.

Nicola from The Frugal Cottage said: We are! Kind of. I've got a stockpile anyway but I'm adding more tinned goods than normal. Just in case things go wrong. And if nothing changes, then we'll just have some extra tins!

Or from Savvy Londoner, whose cat is above, says: We're stockpiling food… for our cat. He's allergic to both chicken and fish, so we have to order canned food from Germany and the Netherlands. Therefore, we're already stockpiling cans.

Laura from Thrifty Londoner says: In all honestly I don’t think it will make a huge difference. And what happens if you stockpile food and then it runs out? You’ll have to buy more food anyway! I’m originally from the Channel Islands which are not part of the EU and food prices are similar to the UK.

Katy from KatyKicker says: I’m not stockpiling for Brexit – as long as there are merchants on Just Eat I hope to be fine! We always have a good 2-3 weeks worth of food at any one time and I’m sure I could stretch it further if need be!

Faith from Much More With Less says: I am seriously considering a bulk order of tins and long life food just in case things turn hairy. Was shocking how soon supermarket shelves emptied during last year's snow storms. Brexit could potentially create much worse disruption for longer.

Previous Post: « Renters Insurance Tips That Can Save You Money Big Time
Next Post: 5 Great Home Improvements for 2019 »

My annual photo on Princess Road and WOW what a di