It's Sunday, which can only mean one thing – boot sale day! The sun was shining, bacon sandwiches had been consumed and I had 5 crispy £10 notes in my wallet from last month's £10 per day challenge, ready to spend on Things to make me rich. And today did not disappoint. 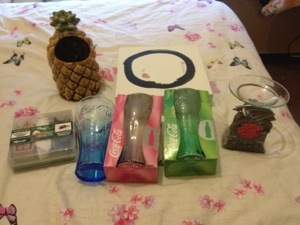 We found a stall selling Coke glasses, and being big fans, we wanted to snap them up. We had agreed a deal for 4 glasses and the pineapple vase with a seller – but the photo only shows three Coke glasses. That is because we were sniped by an old lady! I just stood in shock as she picked up something we were buying and said ‘I'm having that'. I'm kicking myself for not speaking up – I was absolutely shocked and just stared at her open mouthed. What's annoyed me even more is that we paid the same price for the 4 items as we'd agreed for the 5. Gr. We also found a Chinese painting for “serenity” – Tony's username on a lot of places is “Cold Serenity”, so for £1 we had to snap it up. Also featuring a desktop fishing set for £1 (stocking filler for my Dad) and a dragon oil burner for 50p.

As we meandered along, of course stopping at the doughnut van, we found this handsome guy. As a child I had a large tiger on my bed, and for some reason I just had to have this guy today. I haven't quite figured out where he will live (or really, what on earth possessed me to buy him…maybe the sun?) but here he is. £5 in the end, so if we decide that he doesn't really fit in, he can be sold on.

I think that we can successfully name today “Lego day”. The top three games were from 3 different stalls, and in the end we paid £10 for this entire lot. 3 of them are brand new, so hopefully we've got a great deal. Mostly for selling since I doubt Tony's niece will still be interested in Lego Friends by Christmas. 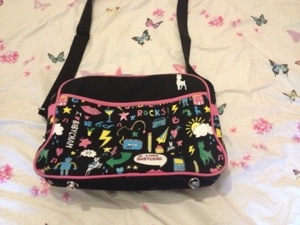 I took a bit of a gamble with this – it is a Babysham bag. I remember wearing Babysham shoes in my teenage years – and I also remember selling them for a lot of money once I grew bored of them. This bag was £1 and it is destined for eBay. 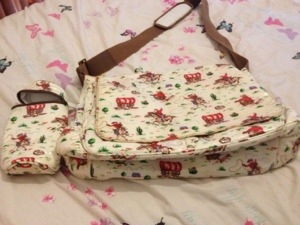 This morning we started at the back of the boot sale, and I'm very glad that we did. I recognized this Cath Kidston print bag instantly – whilst it isn't a print I particularly like, I knew that it would sell well on eBay. But I also knew that sellers tend to know that Cath Kidston bags sell well, and you're extremely lucky to pick one up at a boot sale for under £25. Still, not to be deterred, I bravely asked how much the bag was, and was pleasantly surprised to be told it was £3. Just £3! Even better, when I had a look inside, it had a bottle holder – I sold one recently on eBay for £3-£4 (I can't recall the exact amount), so it was as though I'd got a bag on top for free. There is a small amount of damage on the inside – but with a well photographed and descriptive listing, this shouldn't be a problem at all. I have since discovered that it is a nappy bag, not a messenger bag as I'd originally thought – but there is nothing on it that screams “nappy bag”, apart from the extremely useful compartments.

My only problem now is that I can't decide whether to sell it now, or after Florida. I need a bigger handbag for Florida so that I can take some drinks and snacks into the theme parts, and being oilcloth means that it would be great for any water rides. I'm never going to find another suitable bag for £3 – even though it isn't a print I'm too keen on, I don't exactly hate it. And I could always sell it once I get back. What do you think?