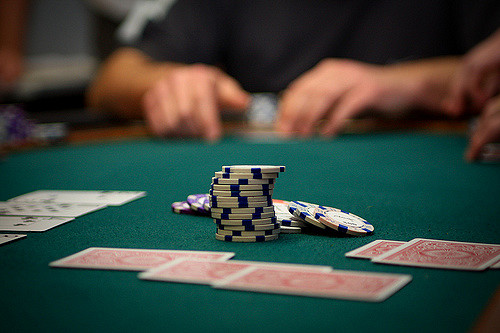 Caption: Live poker is fun, but online poker is where the money is at.

For online poker fans, deciding who is the best professional poker player can be very subjective. After all, there are so many different varieties of poker to play, so many player styles and a diverse range of personalities among the players themselves that picking a favourite becomes a personal choice. Take into account how much skill and talent is necessary for online poker games, where there is no way to judge your opponents' demeanour or potential, and you have to respect any player that is able to achieve any success.

When it comes to monetary gain though, there are no decisions to be made – the numbers speak for themselves. All online professional poker players are ranked on their earnings, hands and awards, clearly showing which players are dominating the online poker circuit. Here, we’ve looked at the rankings that cut out any back-and-forth on who are the most highly regarded online poker players and explored the careers of the top high-rollers. Fortunately, many of the top players are all extremely nice guys so even if they weren’t your favourite players before, they may soon be ranking high with you too.

Known to many as “The Tiger Woods of Poker”, Phillip Dennis Ivey Jr is one of, if not the most, successful professional poker players ever to have lived. To date, Ivey has won ten World Series of Poker bracelets, as well as one World Poker Tour title and nine World Poker Tour final tables. For a long time, Ivey was regarded by his fellow professional poker players and fans of the game alike as the best all-round player on Earth, dominating live cash games and online sessions with ease.

Ivey’s journey into the world of poker began in the late 1990s in New Brunswick, New Jersey where he would compete against his co-workers at a telemarketing firm. Before long, it became clear to Ivey and those around him that he had a talent for poker, and so he began entering into big name tournaments. Though Ivey was the first person to beat Amarillo Slim at a heads-up table in 2000, it was at the 2002 World Series of Poker that Ivey first made a name for himself on the circuit, after winning three bracelets and gaining the nickname “The Phenom”. Over the following years, Ivey won many more tournaments and tables, racking up an incredible amount of winnings.

Still, it was online poker that awarded Ivey some of his largest jackpots and helped him to become the immense poker player we know and love today. Over the years, Ivey has managed to bag $19,242,743, making him the biggest winner in professional online poker to this day. Since these colossal wins, Ivey has moved to Hong Kong, although he did state that he would be returning to the poker circuit this year. This is great news as many industry leaders consider Ivey to be the best hope online poker has of becoming mainstream in the United States.

A post shared by Patrik Antonius Official (@patrik_antonius_official) on Apr 1, 2018 at 9:12am PDT

While Phil Ivey may be the world’s best all-round player and became famous for bagging bracelets at almost every event he takes part in, not every online high roller comes with a successful WSOP track record. In fact, Finnish professional poker player Patrik Antonius didn’t even start off as a high roller, instead he was a tennis player and model until the age of 25 and has never won a WSOP bracelet. At least, not yet anyway.

It was in 2005 that Antonius first began making waves on the circuit, having claimed two finishes near the final tables of the European Poker Tour and World Poker Tour, finishing 12thand 15threspectively. Although he has no WSOP bracelets or WPT titles to his name, Antonius has reached 6 final tables and has claimed a title at the European Poker Tour. He is also a regular at the Big Game, which takes place annually at the Bellagio, Las Vegas and has been known to attend the 888poker festival alongside other big names such as Mitchal Mizrachi and Will Kassouf. There’s no denying that Antonius is one to watch at live tournaments, having gained quite the reputation and nicknames such as “PA”, “Black Lotus” and “The Finn”.

However, where Antonius truly thrives is at online poker tables. He is a heads-up specialist and can regularly be found at high-stakes online games where he has won millions of dollars. In fact, in November 2009, Antonius was awarded the largest jackpot in online poker history, standing at $1,356,946, when he beat Viktor Blom in a record-breaking pot-limit Omaha game. Since 2007, Antonius has managed to rack up online poker winnings of $11,315,548, making him the second most successful online poker player in history.

Finally, we have Russian professional poker player Alexander “Joiso” Kostritsyn. Although he is ranked as the 12thmost successful online poker player at this time, he is still regarded as one of the best cash game players in the world and is often compared to both Ivey and Antonius for his online poker skill.

This is even more impressive when we consider the fact that Joiso began playing professional poker in his very early 20s, having found an online poker community made up of fellow Starcraft players. At first, Joiso didn’t really take online poker all that seriously despite winning small-stakes games regularly. It was only when his family began struggling financially that Joiso and his mother decided to really see where Joiso’s poker skill could take them.

He went on to make a name for himself in 2010, when he won Event No.9 at the World Championship of Online Poker, leaving with $269,284. Since then the online poker professional has continued to play several variations of online poker, often choosing the highest stakes possible. In 2013 he won $2.7 million online, though he didn’t describe this as a winning streak due to the immensely large stakes that were being played. Hopefully, alongside dominating the world of online poker, we hope to see Joiso return to the world of live cash games as he truly deserves a shot at a WSOP bracelet.

Honourable mentions for the top online poker professionals who have won huge jackpots include Dan “jungleman12” Cates ($10,270,847), Ben “Bttech86” Tollerene ($7,499,323) and Di “Urindanger” Dang ($7,411,126). There’s absolutely no denying how skilled any of the players we’ve mentioned are, especially since online poker is often considered more difficult than live games, mostly due to the lack of face-to-face competition. After all, it’s pretty difficult to tell if someone is bluffing over the internet. Instead, every move must be based entirely on talent. These players, from Ivey to Joiso, have well and truly mastered their craft, enabling them to live the high life with no limits.